The Council Square (Piata Sfatului), known to the Saxon population as the Marktplatz, is the heart of the old medieval Brasov. In the centre of the square lies the Council House, built in 1420. The tower,called the Trumpets Tower, is in fact much older, and was used as a watchtower to warn of approaching armies. The building was restored after the great fire of 1689.

The Council House served as meeting place for the town councillors, known as centurions who were the decision makers of that day and who would all have been Saxons.

The building has hosted the Brasov History Museum since the 1950’s. The museum is structured in 3 departments; archaeology, medieval history and modern history.

The History Museum (The Council House) 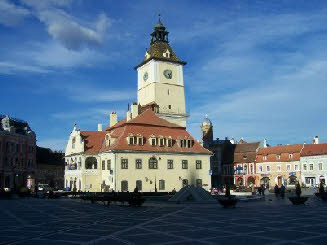