During the 12th century, German craftsmen and merchants known as the Transilvanian Saxons were invited to Transylvania by the King of Hungary to settle and defend the frontier of his realm. The chronicler Krauss lists a Saxon settlement in actual Sighisoara by 1191. By 1337 Sighişoara had become a royal center for the kings, who awarded the settlement urban status in 1367 as the Civitas de Segusvar.

The city played an important strategic and commercial role at the edges of Central Europe for several centuries. Sighisoara became one of the most important cities of Transilvania, with artisans from throughout the Holy Roman Empire visiting the settlement. The German artisans and craftsmen dominated the urban economy, as well as building the fortifications protecting it. It is estimated that during the 16th and the 17th centuries Sighisoara had as many as 15 guilds and 20 handicraft branches. The Baroque sculptor Elias Nicolai lived in the city. The Wallachian prince Vlad Dracul (father of Vlad the Impaler (Dracula), who lived in exile in the town, let minted coins in the city (otherwise coinage was the monopoly of the Hungarian kings in the Kingdom of Hungary) and issued the first document listing the city's Romanian name, Sighisoara.

The city was the setting for George I Rákóczi's election as Prince of Transylvania and King of Hungary in 1631. Sighisoara suffered military occupation, fires, and plagues during the 17th and 18th centuries.

Central Sighisoara has preserved in an exemplary way the features of a small medieval fortified city, it has been listed by the UNESCO as a World Heritage Site. Sighisoara is considered to be the most beautiful and well preserved inhabited citadels in Europe with an authentic medieval architecture. In Eastern Europe, Sighisoara is one of the few fortified towns which are still inhabited. The town is made up of two parts. The medieval stronghold was built on top of a hill and is known as the "Citadel" (Cetate).The lower town lies in the valley of Târnava Mare river.

Well worth a visit!! 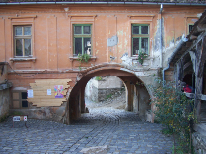