Jews have lived in Braşov since 1807, when Aron Ben Jehuda was given permission to live in the city, a privilege until then granted only to Saxons.

Their are 2 Synagogues in Brasov. The old Orthodox Synagogue which was built in 1877 for then the new community of Orthodox Jews. The synagogue was ravaged by the Nazi’s from 1927 upto the WW2. This synagogue can be found at 64 Castelului.

The main synagogue (or Jewish temple) can be found on 27 Poarta Schei St. and was built in 1899. 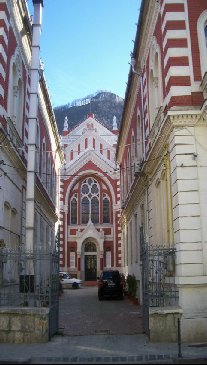