The First Romanian School  is located on the grounds of the 16th century church of St. Nicholas, its self located in the historic district of Şchei, now part of the city of Braşov.

The church was built in the 14th century and the school was believed to have started in 1583, using the Cyrillic alphabet for teaching. This changed in 1833, when the principalities united and higher education started and the language changed to Latin, which immediately enhanced the standard of education.

The background of the students was varied and, being the only school in Transylvania, people came from far and wide, although mainly from the southeast of the region. Not everyone went to school, however. Each village paid for one student to attend the school, in order to learn to teach upon returning and share their education. It is not known exactly how the school was founded, but it was recognised by the Pope in 1395.

The school remained in use right up until the 20th century, and closed in 1941. The collections of archaic and original items were gathered starting in 1933 and were first organized in a museum in 1964.

It is also home to the first Romanian Bible.

The museum also contains the first Romanian printing press. Only 39 books were made by this press, which is hardly surprising given the labour required, however the work it did produce included plenty more firsts. The first Romanian letter in Latin was produced by the press, the first Romanian schoolbook and the first Bible, which was printed on goatskin and had a cover weighing a hefty seven kilograms.

Several more books that were used have been preserved; in fact the library contains six thousand books which were used in the school.

There is a plaque above the school entrance. In English, the text reads: "This ancient place of learning, the first Romanian school in all of Greater Romania, was completely rebuilt in stone in the years 1595-1597 through the generous gift of Prince Aron of Moldavia and through the care for learning of the Archpriest Mihai, being built anew in the year 1761. Flowering under the shield of the Church, it served for hundreds of years as a centre of education for youth and adults. And after the most important primary schools and the Orthodox high school of Braşov were built, [it functioned] as a meeting place for the parish council and later sheltered the historic archives of St. Nicholas Church. 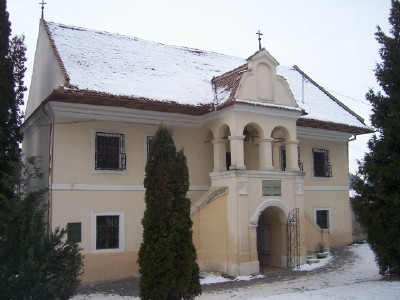