The Black Church, which is one of the most famous landmark in Brasov, rises from the North West of the Council square in the centre of Brasov and dominates the whole square.

Building work commenced  in 1385 and took nearly a century to complete. Originally called St Mary’s it was renamed the Black Church in 1689 after the great fire of Brasov  which destroyed many building and left the walls of the Black Church blackened.

The Black Church has become a symbol of Transylvanian art  and is largest gothic church between Vienna and Istanbul. The church is also renowned for its 4000 pipe organ which was installed in 1839. Organ recitals are held every Tuesday ay 6pm and can sometimes be packed out.

The church is also famous for its massive collection of Turkish rugs which were donated to the church from merchants from their travels in the east.

The Brasov was greatly influenced by the reformation  which spread like a wild fire throughout the Saxon community which resulted in the Black Church becoming a Lutheran church.

To the south and the west of the church are the buildings of Honterus Gymnasium the famous school named after the great apostle of the Luther’s Reformation in  Transylvania. A stature of him can be seen at the side of the Black Church 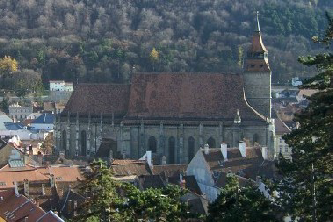